Ten days to the deadline for the first draft of a ten-minute play for this year’s Inspirato Festival (at the Alumnae Theatre in Toronto, May 30-June 8, 2013).

Below, the fellow Inspirato playwrights in the same predicament. Half of us have to write a play related to « tunnel » and the other half of us on « rope ». (Then, we work with a dramaturge to polish the play in time for production.) 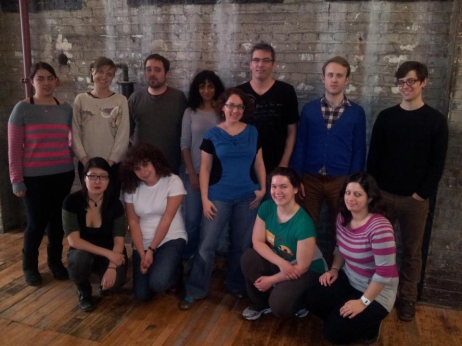 So far, I’ve written about two women attempting to rob a club owner, a mother eager to see her child off to college and a violin maker in love with a musician. None of those plays  have what it takes to make it to the festival’s mentors.

However, I’m fairly confident about my latest attempt, in which two crooks get swindled. I now just have to figure out if anyone gets shot at the end. Thoughts?

I happily began the year 2013 with three bits of good writing news:

– My short story Nelles (in French) will be published in the literary magazine Virages in March. (an excerpt can be found here)

–  I will have a ten-minute play produced in this year’s Inspirato Festival, for which I must  write a play from scratch.

As part of  Inspirato Festival’s Playwrights’ Mentoring Project, I attended a day-long workshop during which I met my fellow playwrights and did short writing exercises before being assigned the subject matter of the play I am to write for the festival in June 2013.

One of the exercises included building a small sculpture and writing a free flow/stream of consciousness monologue from its point of view. The result:

We voyaged across the sea, but remain perched in precarious existence. If we photosynthesized, we’d be leaning toward the sun. As it is, we merely lean gravity-ward, which annoys us as we yearn to achieve more. We are both practical and whimsical; our career as a children’s entertainer didn’t last long. If we had the means, we’d bask in the collective glow of of super troupers and admiration. Sadly, the reflection of mere trinkets in the mirror remind us that inanimate life cannot hope, as Pinocchio did, to become real. And even if we fulfilled our dream of a grander, more productive life, it might be at the cost of a separation too painful to fathom. A diminutive pedestal therefore must suffice; hope of a melody at our centre remaining merely the lullaby of slumber, which, even that, escapes us. 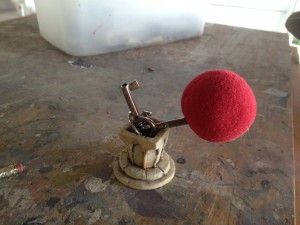 A trinket from Croatia, a set of skeleton keys and a foam clown nose get me writing.

It’s unlikely that this text makes it anywhere into the short play I need to write by next month, but it was fun playing with words and getting something down, pencil to paper. Now to write about rope…

My living room has been my procrasti-Nation for the past few weekends. Despite promising myself I would have my new play Seven Dragon Happy-Go-Lucky Golden Garden House of Foo(d) updated by mid-February (oops) early March (nope) end of March (fingers crossed), I’ve been easily distracted by the usual: watching my son play choo-choo with his Thomas the trains (yes, there are more than one), watching sci-fi TV shows with my husband, and washing and folding the laundry.

There is no ‘logical’ reason for my postponing work on this play. My mentor is (was) expecting it, I know what I have to update and, most weekends, I have time to devote to the project (as this article proves with its existence). So why no work? Am I paralyzed with the fear of the final product, dreading letting my play fend for itself in the world? I can’t imagine that to be so; I’ve worked on Seven Dragon longer than I’ve had my son. With my mentor’s help, I will seek a theatre company to workshop and produce it. I’ve long dreamt of seeing it play out on stage.

But that can’t happen until it’s ready. And it won’t be ready until I modify a scene and adjust the ending. So. Off I go, then. When I come back from the gym.